Canine keratoconjunctivitis sicca: disease trends in a review of 229 cases

原文アブストラクト
OBJECTIVE: To investigate the disease patterns in dogs with keratoconjunctivitis sicca referred to the University of Glasgow Small Animal Hospital.

METHODS: A retrospective study of 229 cases was carried out.

RESULTS: There were 44 breeds in the study, with four breeds, English cocker spaniels, cavalier King Charles spaniels, West Highland white terriers and shih-tzus, making up 58 per cent of the cases. Among these four breeds, two breed-dependent disease patterns, one chronic and one acute, were identified. English cocker spaniels and West Highland white terriers had a mean age at onset of clinical signs of five years and one month and five years and six months, respectively, with more females affected than males. Clinical signs consisted predominantly of conjunctival hyperaemia and mucopurulent discharge, with a relatively low incidence of ulcerative keratitis. In contrast, cavalier King Charles spaniels and shih-tzus showed a more acute disease pattern with a biphasic age distribution at 0 to less than two years of age, and four to less than six and six to less than eight years of age, respectively, with more males affected than females and a significantly higher incidence of ulcerative keratitis in some cases resulting in corneal perforation.

CLINICAL SIGNIFICANCE: The study reveals interbreed differences with respect to sex, age and risk of ulcerative keratitis which have not been detailed previously in a referral population. 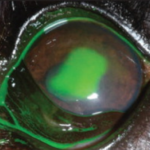 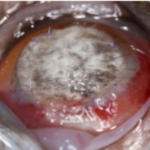 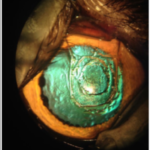